Going halves in everything

Born in Turin on June 9, 1837, the youngest of nine children, Michael came to the Oratory in 1852. One day Don Bosco told him: “We will go halves in everything”. He was among the first group to whom Don Bosco suggested the formation of the Salesian Society.

For 36 years he was his closest collaborator in all stages of the development of the Congregation. He was professed in 1855, was first spiritual director of the Congregation at 22 (1859) and was ordained in 1860. He became the first director of the Mirabello College at 26 (1863-1865) and, later, was Vicar of Valdocco, with its 700 pupils and of the Society. He was administrator of the Letture Cattoliche (Catholic Readings), responsible for formation (1869) and for personnel. In 1875 he became Director General of the Salesian Sisters and he accompanied Don Bosco on his journeys.

At the explicit request of the Founder, in 1884, Pope Leo XIII named him to succeed Don Bosco and he confirmed him as Rector Major in 1888. Fr. Rua was seen as the ‘living Rule’ because of his austere fidelity, yet he also displayed a fatherly spirit that was capable of great thoughtfulness, so much so that he was known as ‘a king of kindness’.

With the growth in the numbers of confrere and the development of the works, he sent Salesians all over the world, giving special attention to missionary expeditions.

When beatifying him, Pope Paul VI stated: “The Salesian Family owes its origin to Don Bosco, to Fr. Rua its continuation… he developed the Saint’s example into a school, his Rule into a spirit, his holiness into a model. He turned the spring into a river”. His remains are venerated in the crypt of the Basilica of Mary Our Help.

Beatified on 29 October 1972 by Paul VI. 29th October is the day his memorial is kept liturgically.

Artemides Zatti was born in Boretto, in the province of Reggio Emilia, on the 12th October 1880, to Louis Zatti and Albina Vecchi, a farming family. Since he was a small child he was accustomed to work and sacrifice. Already by the time he was nine, he was earning money as a hired hand. In 1897 the Zatti family, forced by poverty, emigrated to Argentina to establish life anew at Bahia Blanca. Here Artemides began to attend the parish run by the Salesians and became a helper to the parish priest, Fr Carlo Cavalli, with whom he often shared work and prayer. He felt a desire to become a Salesian, and was accepted as an aspirant by Bishop Cagliero and, by the time he was twenty, went to the Community at Bernal.

Tuberculosis – and a promise

He began studying in earnest to make up for lost time. Providence entrusted him with assisting a young priest who was ill with tuberculosis, and who then died in 1902. The day when Artemides was to receive his clerical habit, he too contracted the disease. When he got back to the community, Fr Cavalli sent him to the mission hospital in Viedma. Fr Evarisio Garrone, with wide experience in the task, was in charge of the hospital. Artemides, along with him, asked and obtained from Mary Help of Christians the grace of recovery, promising to dedicate his entire life to looking after the sick.

Responsibility for the pharmacy

He recovered and kept his promise. At first he began to look after the pharmacy attached to the hospital, where he learned how Fr Garrone worked: only those who could need pay. When Fr Garrone died, he took on the entire resposibility. In 1908 he made his perpetual profession. He was completely dedicated to the sick. People sought him out and admired him. For the personnel at the hospital he was not only an excellent director, but an excellent Christian above all.

A day in the life of…

This is how his day was spent: “At 4.30 he was already up. Meditation and Mass. Visit to all the sick. Then on his bike he would head out to visit the sick around the city. After lunch he would play an enthusiastic game of bocce with those who were recovering. From 2 pm till 6 pm he would visit those in the hospital again as well as those outside. Then until 8 pm he would work in the pharmacy. Then back to the hospital again. Until 11 pm he would study medicine, and finally, some spiritual reading. Then he would rest but was always available for anyone who called for help”.

He gained his diploma as a nurse. In 1913 he led the construction of the new hospital then, much to his displeasure, it was demolished. Without being discouraged he started out afresh. Like Don Bosco, Providence was his first and certain entry in any of the accounting he had to do. Mary Help of Christians never abandoned him. When Don Bosco was dreaming of his Salesian Brothers, he certainly wanted them to be holy like Artemides. In 1950, he fell on the stairs and was confined to bed.

After some months signs of cancer showed up. He breathed his last on the 15th March 1951.

John Paul II declared him Beatified on the 14thApril 2002. His body is laid to rest in the Salesian chapel at Viedma. 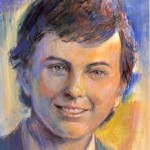 Michael was incredibly lively, a real young group leader, who was only taken in hand by Don Bosco’s pedagogical expertise and set on the way to holiness.

Don Bosco enters Michael’s life with out fear, takes him in hand and releases the energy in him which is typical of the Preventive System, which allows youngsters to grow “from within”, encourages them to do good, happily and with satisfaction, makes them aware of the risks they run when they take wrong directions, and prepares them for tomorrow through solid character and conscience formation. At Don Bosco’s school and under his fatherly gaze, through persevering practice of small, easy and pleasant exercises of prayer, study and charity, Michael achieves a high degree of perfection. Don Bosco in fact is convinced that the “splendour of virtue we are speaking of can be obscured and be lost at every little scurry of temptation and therefore any small thing which can help preserve it should be considered very valuable”. A typical expression of this pedagogy and educational concern were the famous “seven policemen given to us by Mary”, advice that Michael gave a friend to help him preserve the virtue of purity, inviting him to read them and praise them.

This spirit of keen faith, nurtured by filial devotion to Mary, was joined with “Michael was outstanding for the charity he showed to others. He knew that the exercise of this virtue was the most effective means to grow in the love of God. He practiced this virtue on every occasion offered him, even if it be a very minor one”. From a quarrelsome, even violent street kid, Michael becomes a leader in recreation, consoled any friends in trouble, brought about peace and reconciliation. His concrete practice of charity led him to build true friendships that helped his friends avoid deceit, build more open and sincere relationships with their parents and teachers, and live a happy busy everyday existence.

Michael grew in awareness that he had failed to love God and was not obedient to his will: “As I admire the moon I cannot help crying because it has for so many centuries regularly lit up the night without once disobeying the orders of its Creator. I, instead, who am so young and a rational creature who should have been faithful to the laws of God, have disobeyed Him so many times and have offended Him in a thousand ways”. At the hour of death this awareness led him, with Don Bosco’s help, to give a message for his mother, a final desire for peace and reconiliation: “ask her to pardon me for all the suffering I caused her. Tell her that I am sorry. Tell her that I love her and that she should courageously continue her good work. Tell her that I die willingly and that I am leaving this world in the company of Jesus and Mary and that I will be waiting for her in heaven”.

Michael Magone had lost his father. When he met Don Bosco for the first time at the station at Carmagnola he was told: “This evening say a fervent prayer to our Father in heaven; pray with all your heart, trust in Him and He will look after me, after you, after everyone”. Magone’s ‘Our Father’, said with all his heart, revealed God’s provident and prevenient love through Don Bosco’s charism.

source: sdb.org and other articles

Born on May 28, 1856 at Lu Monferrato (Alessandria), Philip was won over by Don Bosco at the age of twenty-two.

As a priest, he was entrusted with the formation of the aspirants and novices. In 1899 Fr. Rua sent him as Director of the community of Sarriá, Spain and later as provincial leader. In this role he contributed greatly to the development of Salesian Spain.

Nominated Vicar General of the Congregation, his gifts as father and the wealth of his initiatives became even more evident. He set up formation centres to offer spiritual and social assistance to young working women, planned printing works and guided and supported the Salesian Sisters through a particularly sensitive period in their history. He gave great encouragement to the Cooperators, and set up the World Federations of Past-Pupils (male and female).

Working with the ‘Zelatrici di Maria Ausiliatrice’, he saw the possibilities for a new form of consecrated life in the world and made it a reality. This group would later become the “Volunteers of Don Bosco”. He was elected Rector Major in 1922. “All that is lacking to Fr. Rinaldi is Don Bosco’s voice: he has everything else” said Fr. Francesia.

A master of spiritual life

He used all his energies in adapting Don Bosco’s spirit to the times. He did much to develop Salesian studies and was a master of spiritual life. He worked to renew the spiritual life of the Salesians, had absolute confidence in God and unlimited trust in Mary Our Help. He asked Pius XI to grant the “indulgence for sanctified work”. He took great interest in the missions, sending many young Salesians to learn languages and customs so that evangelisation might be more effective.

He died on December 5, 1931. His remains are venerated in the crypt of the Basilica of Mary Our Help.

His memorial is celebrated on December 5. He was beatified on 29 April 1990 by John Paul II.